There’s been a petition for a while on change.org about protecting the Lake District National Park’s World Heritage status. It’s under threat from an influx of SUVs and motorcycles using the green lanes and bridle ways in one area.

You can stream his video for an hour or two, and look out, through your smart tv, computer or tablet, at a wood near Rydal Water filled with bluebells – a window through time to last summer.

You might like it, he suggests, as a background to your work, or to your life generally. “The aim is to increase your productivity, creativity and wellbeing…” he says.

There are more videos below – several more of the Lake District and one of Dartmoor (and another of Battersea Power Station, seen across the Thames). 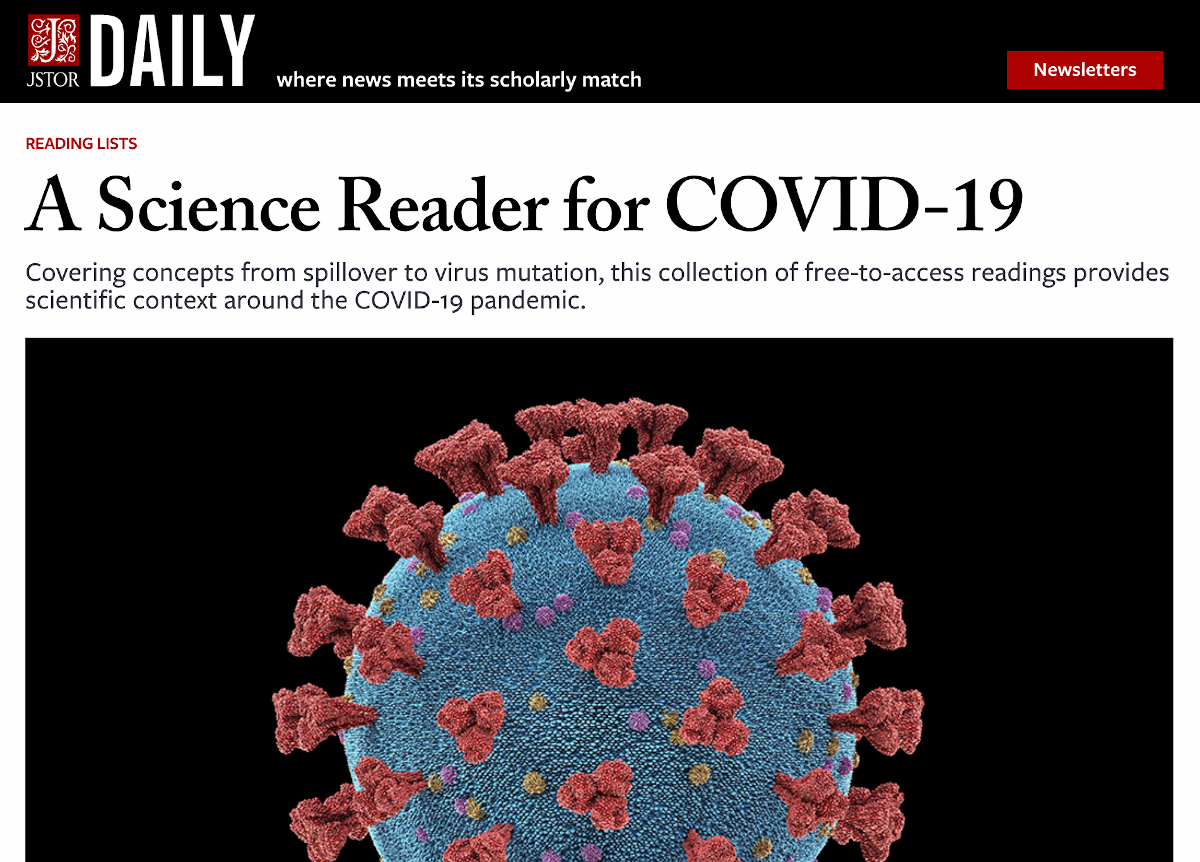 Jstor is a route to accessing academic journals online.

Most academic journals are paywalled, but Jstor makes a selection of interesting material available free for everyone. (They have a fascinating newsletter.)

This page links to a selection of science articles describing important features of viruses in general, and coronaviruses in particular:

A Science Reader for COVID-19

You might also be interested in Jstor’s Teaching Pandemics Syllabus, a set of ‘readings on the history of quarantine, contagious disease, viruses, infections, and epidemics offer important context for the current coronavirus (COVID-19) pandemic’.

There are a lot of articles here, covering issues of history, politics, law, language… all relevant in one way or another to the current pandemic.

No-one is keen on the lockdown, however necessary it is.

But taken overall, we’re relatively very  very lucky – there’s plenty of food in warehouses all over the country, we have wonderful NHS staff, our national infrastructure might creak in places, but it mostly works.

Others, for example, the people of Venezuela, have had things much harder long before any pandemic arrived.

This TED talk, from February, explains how Venezuelan ex-pats are using technology (twitter especially) to help friends, relatives and the people back at home to access medicine, share information, and stay in touch with each other.

If things get difficult here – and we really hope they don’t – we may find ourselves learning from their example. There’s such a lot that can be done at local level!

And if, as we hope, we are spared the worst, perhaps we could support these and other developments. We’re being brought to a realisation of how precarious our societies are, and how much we rely on each other – let’s keep that understanding right through the crisis and out the other side!

So here we are, perfecting our social distancing skills while schools, sports and other forms of social engagement are on indefinite hold, by a dangerous virus named after a (regal) crown. The coronavirus is named because the center envelope is surrounded by small protein spikes called peplomers. These little protein spikes wreak havoc when they attach to lung tissue and hijack otherwise healthy tissue into building a potentially lethal coronavirus army of invaders.

Because the virus settles primarily with the respiratory tract – the nose, mouth and lungs – it is highly contagious when people sneeze, cough or exchange respiratory droplets with others. Despite its importance, social distancing has been a social disappointment for many weekend warriors, team sport athletes, fitness fanatics and sports fans who find camaraderie, biochemical joy from dopamine rushes or stress reduction through regular exercise and sport.

We are both sports scientists who study athlete health and safety. We’re also proud exercise addicts who find the prospect of not exercising almost as disturbing as the prospect of the disease itself.

Here’s how exercise affects the immune system in response to the flu and some practical tips on how much people should (and should not) exercise.

Look for the ‘just right’ amount

Both too much and too little are bad while somewhere in the middle is just right. Scientists commonly refer to this statistical phenomenon as a “J-shaped” curve. Research has shown exercise can influence the body’s immune system. Exercise immunity refers to both the systemic (whole body cellular response) and mucosal (mucous lining of the respiratory tract) response to an infectious agent, which follows this J-shaped curve.

A large study showed that mild to moderate exercise – performed about three times a week – reduced the risk of dying during the Hong Kong flu outbreak in 1998. The Hong Kong study was performed on 24,656 Chinese adults who died during this outbreak. This study showed that people who did no exercise at all or too much exercise – over five days of exercise per week – were at greatest risk of dying compared with people who exercised moderately.

Additionally, studies performed on mice demonstrated that regular exercise performed two to three months prior to an infection reduced illness severity and viral load in obese and non-obese mice.

Thus, limited animal and human data cautiously suggest that exercise up to three days per week, two to three months prior, better prepares the immune system to fight a viral infection.

What if we have not exercised regularly? Will restarting an exercise routine be good or bad? Limited data, also obtained from mice, suggests that moderate exercise for 20 to 30 minutes a day after being infected with the influenza virus improves the chances of surviving. In fact, 82% of the mice who exercised 20-30 minutes a day during the incubation period, or the time between getting infected with flu and showing symptoms, survived. In contrast, only 43% of the sedentary mice and 30% of the mice who performed strenuous exercise – or 2.5 hours of exercise a day – survived.

Therefore, at least in laboratory mice, mild to moderate exercise may also be protective after we get infected with the flu virus, whereas a little exercise is good while no exercise – or even too much exercise – is bad.

For those who are “committed exercisers,” how much exercise is probably too much during a flu pandemic? It is clear that both too much exercise and exercising while sick increases the risk of medical complications and dying.

We conducted studies on both collegiate football players and cross-country runners, which showed a decrease in secretory immunoglobulin A, or “sIgA” when athletes competed and trained hard. SIgA is an antibody protein used by the immune system to neutralize pathogens, including viruses.

SIgA is also closely associated with upper respiratory tract infections (URTI). When sIgA levels go down, URTI’s usually go up. We saw this relationship in football players, whereas the players showed the most URTI symptoms when their sIgA levels were lowest. This indirectly suggests that over-exercise without adequate recovery may make our body more vulnerable to attack, especially by respiratory viruses. So, when it comes to immunity, our studies show that more exercise is not necessarily better.

How much exercise may be just right?

Here are some guidelines based on just the right amount – for most people.

How much exercise may be too risky?

Here are some things not to do:

Do not overdrink fluids, especially when sick, to try and “flush out” the toxins or prevent dehydration. It is not true that you can “flush out” toxins.

The J-shaped (“just right”) curve suggests that exercise, like most things, is best in moderation. Stay safe out there and be creative – our game is not over, just temporarily suspended.

[Get facts about coronavirus and the latest research. Sign up for our newsletter.]

This article is republished from The Conversation under a Creative Commons license. Read the original article.

Speakers this week include Bill Gates, Susan David, Gary Liu, Priya Parker, on the personal, the political and the scientific possibilities of our encounter with the coronavirus and each other!

As you probably know, TED talks tend to be well-researched, entertaining and thought-provoking. Join people across the world as they watch and discuss…

Brandon Keim, writing for the excellent online science magazine, Nautilus (Nautil.us), reminds us that outside our human world, life continues as spring returns in the northern hemisphere:

(Look out for the lovely photo of seals that starts the article!)

Are you finding that ads and programmes showing people standing close together are worrying all of a sudden? Why, people are hugging! shaking hands! Don’t they know they should be standing at least 6 feet apart?

For those of us who would like the whole world to reflect the need for extra space between us, Beto Fernandez and Paco Conde of US agency Activista, have been redesigning album covers…

My favourite is the Clash’s Combat Rock – the band members look so thoughtful, separated out like that…

Dyson, famous for their vacuum cleaners and handdryers, are shifting production to ventilators.

They’ve designed one for the NHS from the ground up, created not only specially for victims of covid-19, but also to fit their production techniques.

An interesting article – the data on which it is based is drawn from “smart thermometers” sold and given away by a company, Kinsa Health.

They monitor anonymised data from the thermometers, and have seen a much bigger fall in the number of people with raised temperatures than they would normally expect at this time of year…

Read for yourself at the link (2 free articles a month from Quartz magazine, qz.com)

An enjoyable 3 minute read from The Conversation, a reliable and interesting source of information on many subjects, including the coronavirus.